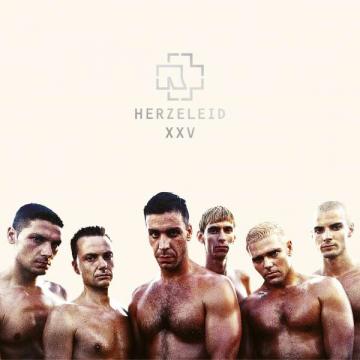 It was 25 years ago to the day, 25 September 1995, that the door to a new era was kicked open. It would go on to shape rock music in Germany and around the globe for decades to come: It was the day, Berlinbased rock outfit Rammstein unleashed their debut album “Herzeleid". To celebrate this anniversary, Rammstein and Vertigo Berlin/Universal Music release limited, remastered editions of the groundbreaking debut on CD and vinyl.

"Herzeleid (XXV Anniversary Edition-Remastered)" will feature the original tracklist on a single CD, housed in a lavish, cross-shaped digipak with deluxe slipcase, and, for the first time ever, the remastered album with HD sound will be available digitally. In addition, there will be a 2LP version with a slipcase containing two 180 gram heavy-weight black vinyl discs with blue splatter effect. The creator of the original artwork, DirkRudolph, is responsible for the revised packaging. The booklets also contain the famous pictures shot by Praler. Both, the CD and vinyl editions are strictly limited.